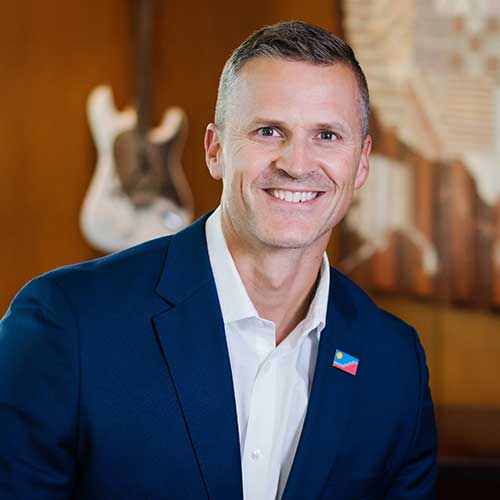 Paul TenHaken began his second term as Mayor of Sioux Falls in May 2022. Since first taking office in May 2018, Mayor TenHaken has amassed a list of accomplishments for the city by putting people first and taking strategic steps to ensure the continued success of South Dakota’s largest city.

Through his One Sioux Falls framework, Mayor TenHaken’s focus is on safety, housing, workforce, and engaging people across Sioux Falls, which has been named one of the best run cities in the country for 2021. The city has achieved accolades for fiscal responsibility and its lowest debt per capita in over a decade. Under his leadership, Sioux Falls has expanded its status as an urban center, including record public and private sector investments planned for downtown. In 2021 Sioux Falls achieved a record building year of more than $1.1 billion in permit valuations, demonstrating the strength of the city’s development and long-term trajectory.

Mayor TenHaken has demonstrated his commitment to public safety through projects that include opening The Link, a behavioral health and addiction triage center, and securing funding for a public safety campus and Metro 911 dispatch center, which broke ground in fall 2021. His focus on improving lives and opportunities in the area and investing in the future generation has resulted in initiatives like the Sioux 52 Mentoring Initiative and the Mayor’s Youth Council. He started the Mayor’s Fitness Challenge in April 2020 at the onset of the pandemic to encourage residents to move and be active, and this annual challenge has since motivated thousands of residents to prioritize physical fitness and wellness.

Mayor TenHaken was selected for the Bloomberg Harvard City Leadership Initiative with a focus on innovation and chairs the Federal Communications Commission’s (FCC) Intergovernmental Advisory Committee. Acknowledged as a dedicated public servant, a successful entrepreneur, and an avid athlete, Mayor TenHaken’s proudest accomplishment is his family—wife, Jill, and their three children.